I received an interesting email in my inbox yesterday with a link to an article named “BlackBerry Results Refute Rumors of its Demise” sponsored by BlackBerry. In essence it was pushing the reasons why BlackBerry as a company is far from dead. Having read the article, some good points were made, a strong installed customer base providing revenues, cost reduction exercises throughout the company, new business still being won, money in the bank, but I just feel that the article smacks of a little desperation from BlackBerry. The article can be read here http://mobilegov-conference.co.uk/files/2014/01/Analyst-review-_BlackBerry.pdf

I can understand wanting to share some positive news, especially given the negative press that they have had from the failed sale to fairfax and the lower than expected uptake of the BlackBerry 10 devices resulting in a write down of unsold stock; however to me it feels like they are pushing the wrong message. I’d like to hear about what they are doing to improve their offering(s), how they are going to do it and why it makes a difference to me or my business, not a cursory hand wave to try to detract attention from IOS and Android whilst trying to push Microsoft into the corner.

What is worse is some of the arguments used to back up their claims, such as “IT decision makers prefer BlackBerry over Windows phone almost 3 to 1“. Whilst this may be true, actual total sales of smartphones in 2013 shows that Microsoft Windows phones outsold Blackberry ones by almost 2 to 1, albeit this includes consumers as well. 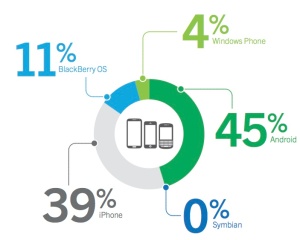 Most worrying though for Blackberry should be the reduction in mind share, the graphic they used (figure 1.) to demonstrate their point shows a pretty damning indication of the thoughts of that same IT decision maker community, IT decision makers prefer IOS over Blackberry almost 4 to 1 whilst they prefer Android over Blackberry by more than 4 times. That is the perception BlackBerry have to change to stay relevant.

The actual Smartphone worldwide sales for 2013 look even more damning (figure 2.), the total share of the market for 2013 was only 1.9% for BlackBerry. What do you read into those figures, especially when they drop 3.1% from 2012? This is the problem with statistics, you can shape them to reflect the message you want to drive, so while useful, statistics do not tell the whole story.

Given that BlackBerry has a good customer install base providing income, is winning new business and has money in the bank may indeed indicate that Blackberry still has a pulse, the question for me is are they simply on life support? BlackBerry has many challenges; reducing the operating costs, focusing attention on its current install base, producing smartphones relevant to their users, chasing after new customers whilst developing and driving innovation of the BlackBerry platform is all required to move the business forward, all of this whilst their competition are playing in the same market, seeing their Market Share increase and innovating as well.

Given the fact that both IOS and Android are on the minds of IT Decision makers, it wouldn’t be hard to suggest that a partnership between a secure mail/app provider with one of the Android smartphone manufacturers or indeed Apple could drive adoption and renewal of the BlackBerry platform down. The only question is whether any of these manufacturers has the appetite to do so, given they are playing mainly in the consumer space and only slowly developing corporate grade security and governance features. Maybe BlackBerry could open its platform to provide the BlackBerry service across heterogeneous Mobile OS’s? The time is right for someone to make a play in this space, that might be BlackBerry, but they can’t afford too many more false dawns, BlackBerry Dead? Not quite yet; forgotten – Maybe.